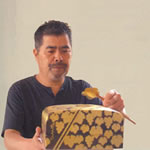 ・ONO, Jiro was born as the son of the late ONO, Hakuko in 1953. Hakuko was the holder of Saga Prefecture Important Intangible Cultural Asset Ceramics.
・He learned a lot how to make pocelain in the Kozan kiln. Works were selected in the exhibition and they had increasingly become valued.
・Following the death of Hakuko in 1996, Jiro decided to become aritst making "yurikinsai". His clue was just fact to have obvserved handwork.
・The Kohakutogeisha pottery was established in 2002.
・We may feel that golden leaf pattern is really mysterious with appearing from surface.
・The brilliant gold decoration and the gentle form make us feel a sense of beauty.
・Jiro passed away in 2010, though he had still enough thought to create "kinsai".