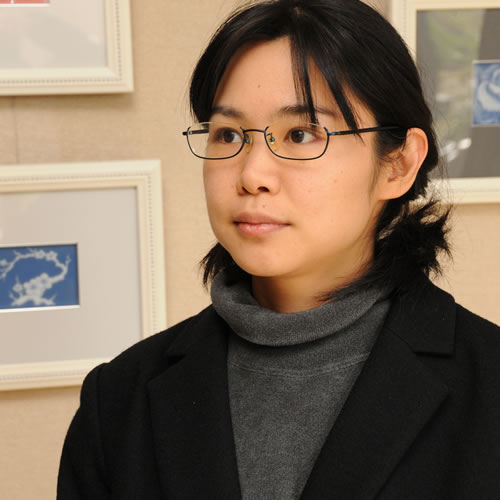 She is the daughter of ONO, Tatsuro, Kozan Kiln.
After she graduated from the university, she entered Kozan Kiln.
She took over the skill of Tsuihakude which the late ONO, Kozan contrived.
She elaborately repeated painting by the slurry, and painted the cute pattern.
Full of kindness pattern is emerged slightly between the backgound color and the glaze.
She pursues the ideal beauty, and makes an effort to polsih her skill in daily life.

The technique of Patio Patt

1. At first, arranging the raw clay befor firing, painting the slurry mixed the background color on that clay. The slurry so as to be equal, while drying, and recoating as five or six times.
2. After the slurry become dry, painting the pattern by the slurry which is not mixed the color. She repeated painting while drying, since the bubble hover can be easily made when much slurry in one painting.
3. After the painting by slurry is finished to some extent, sweeping the dust on the surface gently by the brush or compressor. And biscuit firing is done.
4. After biscuit firing, sweeping the dust again, and providing the transparent glaze, main firing is done.
Slurry: the clay is dissolved in water and mixed transparent glaze as approximately 10%.