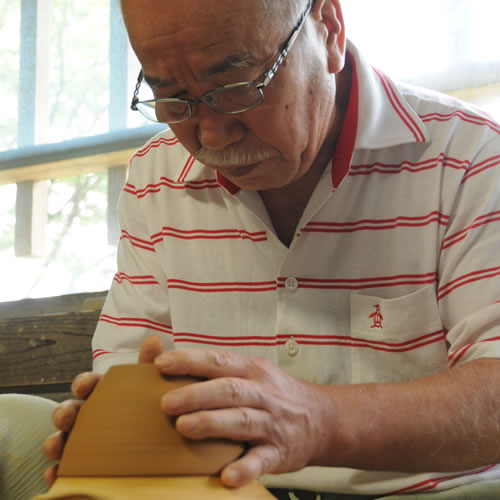 He was born in Toho village, Fukuoka prefecture (old Koishiwara). Moriyamakanzan Kiln was established in 1983 after he studied under his brother Kikuo.
He makes the pottery delicately one by one by the technique of Tobikanna and Hakeme which is the characteristic of Koishiwara Ware.
The color by which the atmosphere of some foreign countries are also felt is popular, although it is made in Japan. Recently, he works on Zogan (inlay) with eagerness, and such as large jars or flower vases by the patels of the cherry blossoms design which placed on whole surface, and curves carefully, makes precious pottery laboriously.
He uses all natural materials such as the clay which is taken at Koishiwara, the glaze which is made with the ashes by the fired rice and firing by the wood-fired kiln.
He keeps in mind for making pottery which fits the contemporary life.
He was qualified in METI-designated Traditional Craftsperson. He values Yonobi (beauty of usage) which is handed down to Koishiwara, and makes attached vessels each time it is used.

1948
Born in Koishiwara village, Fukuoka prefecture (present Toho village)
1974
Returned to Koishiwara, entered the pottery's road and studied under his brother Kikuo
1977
Worked at the originated Moriyama pottery as the craftsman
1984
Moriyamakanzan kiln was established
1996
"The chief of Kyushu Bureau of International Trade and Industry prize" in PAK' 96
2003
Authorized by Traditional Art Crafts qualification