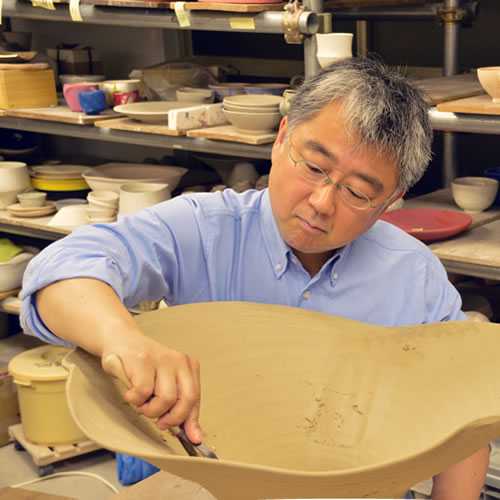 ・Sato worked hard on swimming in the elementary school and participated in the national tournament.
・He was studying arts such as urushi, engraving and other things in the department of craft and was making ceramics too.
・The study of restorative firing method for celadon plate made in China helps him creating ideal pattern.
・His artwork is gradually evaluated as he develops the style.
・He focuses on the formation of work and makes his own porcelain which is connected from point to line, line to plane, and solid.
・Series of hakkosai which emerges both color and shape, in addition to the pursuit of form.
・Urushi decoration in overglaze enamal is done after firing and the beauty is going to change.

・An assistant for ceramic art laboratory in Tokyo University of the Arts
(April 2006 - March 2008)
・Visited the ruins of a kiln at Nanso official kiln and Ryusengama in Zhejiang Province, China
・Worked as an assistant for plate with engraved design at Ryusen
・A teacher of Tama Art University in 2019